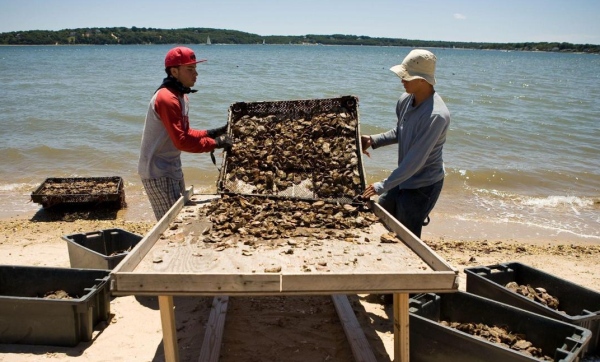 The North Fork of Long Island is home to Cornell University’s Agriculture Extension where thousands of crops are studied along with soil, fertilizing and irrigation strategies.

In addition to the agricultural extension, Cornell has a waterfront Marine and Aquaculture Center with an educational facility and shellfish hatchery.

In 1998, Kim Tetrault, who holds an undergraduate degree in Field Biology from Connecticut College and a Master’s Degree in Shellfish Aquaculture from the University of Rhode Island, made his way to New York. After working jobs in carpentry in order to support himself while volunteering at the Cornell Cooperative Extension Marine Program, Kim was offered a full-time position to run a community restoration program, working with summer interns and student camps at the Marine Extension.

While attending a conference he was inspired by a presentation that changed his life and upon his return, he wrote a business plan for a community training and farming program that would expand the community effort beyond that of the confines of the hatchery, into the public waters of the East End of Long Island.

This program would become a grassroots volunteer project that would enlist local residents in helping restore local shellfish life while learning to cultivate their own oysters in their own waterfront properties under the tutelage of Mr. Tetrault.  He called this program S.P.A.T., an acronym for Suffolk Project for Aquatic Training, but a “spat” is also what they call the baby oysters after they have spawned. The growing season of oysters almost year round since the beginning stages of algae in January to the spawning in February and the larvae in April and May, through the harvesting from June through the winter makes for very little downtime.

Last year, SPAT started a new hatchery on Dune Road in Southampton where they have already grown more than a thousand oysters their first time around.

Volunteers arrive every Monday, Wednesday, and Friday and many have been coming since the beginning. What keeps these volunteers so passionate is that they feel they are part of a bigger cause. Not only have they helped to repopulate shellfish life in our waters but they have also helped to restore the quality of our water since oysters and other bivalves naturally filter water of impurities. These volunteers consider themselves more than oyster farms because they are giving back to the land. In this sense, they are eco-activists and agro-activists, as their efforts are having an immediate impact on our water quality and food sources.